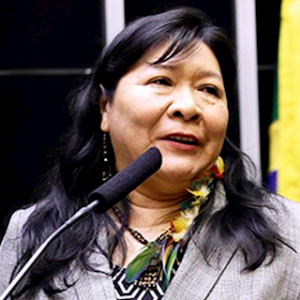 Joênia Wapichana is the first indigenous woman elected federal deputy in Brazil. Born in the Truaru da Cabeceira indigenous community of the Wapichana people, Joênia has a degree in law and worked in the legal department of the Indigenous Council of Roraima (CIR) for 22 years. In her career she has participated in several national and international discussion and foruns, such as the National Biodiversity Council (Conabio), the discussions on the UN Declaration of Human Rights, and the Conferences of the Parties on Climate – COPs. In 2008 she was the first indigenous lawyer to make an oral statement in the Brazilian Federal Supreme Court with the Raposa Serra do Sol Indigenous Land case. She was an advisor to the UN Voluntary Fund for Indigenous Peoples and won the UN Human Rights Award in 2018.