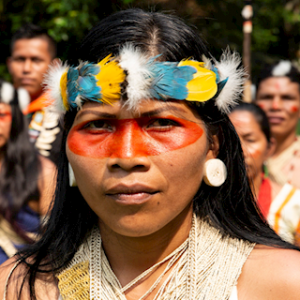 Nemonte Nenquimo is a prominent Indigenous leader from the Ecuadorian Amazon, who is fighting to protect her ancestral territory, culture, and way of life. In 2019, Nenquimo led her people’s historic legal victory against the Ecuadorian government, protecting half-a-million acres of primary rainforest from oil drilling and setting a precedent for Indigenous rights across the region. She is a member of the Waorani nation, legendary hunter-harvesters of the southcentral Ecuadorian Amazon, who currently number approximately 5000 spread across 54 communities over roughly 2.5 million acres of some of the most richly biodiverse and threatened rainforest on the planet. Raised in the traditional community of Nemonpare in the Pastaza region of the Ecuadorian Amazon, Nenquimo co-founded the Indigenous-led nonprofit organization Ceibo Alliance in 2015 to protect Indigenous lands and livelihoods from resource extraction within their territories. In 2018, she was elected the first female president of CONCONAWEP, the Waorani organization of Pastaza province.